BOCAMANDJA, BELIEVING IN THE MAGIC OF ART

…OR NEARLY 10 YEARS OF THEATER IN ECUATORIAL GUINEA

Speaking of Recaredo Silebo Boturu is to speak of Bocamandja; talking about Bocamandja is to talk of theatre; which is to discuss a whole ethnic patchwork: bubis, fangs, combes, bisios… We are dealing with Ecuatorial Guinea. The only country whose official common language between its people is Castillian.

If we say the word Bocamandja, we’re talking about young people who, for almost ten years, have worked across the country using theatre as a means to empower people, to denounce atrocities, to tell stories and tales about the community, and to tell the history of our ancestors which survive and bear up despite the ups and downs of the day to day. To speak of Bocamandja is to talk about young people who get right up close to a community and listen to its concerns, understand its worries, and help to construct that community.

Bocamandja is the combination of two typical dishes: el Bocao is a typical dish from the ethnic group bubi, and el mandja is a typical dish from the ethnic group fang. In a continent where understanding between different cultures continues to be a pipe-dream, bringing these two dishes together is an attempt to create understanding and respect between cultures who are condemned to walk hand in hand along bumpy roads. We have been working for almost ten years, breaking down this immense cultural jungle which until now has gone unexplored, because we believe our footprints lead the way.

We have adapted productions from Europe, Latin America and Africa. We have put on 90% of the dramatic works written by national playwrights and above all, we give priority to works written by our members, based on improvisation and personal experience – and it’s these works which have led us to travel all over our country, and around the world.

Since colonization and the presence of despotism in the country, there hasn’t been a single arts centre in Ecuatorial Guinea. Neither have there been any artistic grants or subsidies. However, we at Bocamandja continue to be convinced by the power of art to shape, educate, inform, strengthen and empower. We believe that the magic of art can construct a better world.

Up against people who would rather look the other way and encourage their people to do the same; against those who would rather shut up and stay that way despite social inequality, we are the story-tellers, actors, musicians, dancers, painter… the artists of Bocamandja. We make the most of our opportunity, promoting theatre’s capacity to revive society, to make noise, to create silence, to build pathways for reflection. There is nothing more natural than singing, story-telling, dancing, reading aloud, drawing, photography, sewing, sculpting and above all theatre, which can help us to bring up and out the inner thoughts of ourselves and others. Bocamandja lives on, and will continue to live on, in spite of everything. 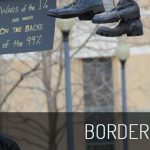