THEATRE WITH NEUROMUSCULAR DISORDERS FROM GREECE

…OR FROM MUSCLE TO MUSCLE ON THE STAGE

Neuromuscular Disorder  is a genetically and evolutionary disorder that has to do with the weakness of the patient’s muscles, that keeps him on a wheel chair without being able to move almost any muscle of the body.

MDA HELLAS is the institution for people with neuromuscular disorders in Greece and I went there one day to work as a theatre teacher. I didn’t know anything about this kind of disorders and how these people were facing it.

When I first met them, I was so afraid I might say or do something that would make them feel uncomfortable. It took me some time to understand that only I was feeling uncomfortable. They are just fine how they are, because that is who they are. And when we started working, I discovered that they were a lot more than that.

They were passionate, creative, willing to do the ‘steps’ to the unknown world of theatre. Besides, they had done those ‘steps’ so many times in their heads, that they knew the way already.

Because, what you realize immediately, is that it’s only the body that these people cannot move. Everything else inside them moves and gets moved. And it’s that inner strength that moves us all isn’t that right?

We work with every muscle that can be worked. Fingers, an eye, the tongue, are also part of our performing ‘tools’ and we use them. We put all our imagination and strength to these parts. Speech is also very important. We do a lot of speech training as it helps the face muscles getting stronger. Training the ‘alive’ muscles is the most important thing in our work. And of course speed. You can never imagine what a wheel chair can do, until you see it!

Our performances are fully professional and we are eager for the applause not out of sympathy for trying, but because we actually did it, if that’s the case. We hope every year to grow stronger and better. Sky is our limit and we believe that with the wheel chair we have a good chance reaching it quicker!

Annita Capousizi is a Greek philologist, actress, drama teacher and director. She wishes drama work with people with neuromuscular disorders to cross the borders of her country and go global. 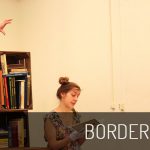