…OR INTERGENERATIONAL PROJECTS IN AMSTERDAM

In 2010 two young theatre directors, Jaïr Stranders and Bo Tarenskeen, initiated Theater Na de Dam, a theatre manifestation in the context of May 4th, which is the national Remembrance Day in The Netherlands. On that day war victims, and originally primarily those from the Second World War, are remembered with a national memorial service held on the Dam square in Amsterdam.

Since recent years the Remembrance Day has started to risk losing its historical significance and national value, especially for the younger generations.  Simultaneously the memorial service has gotten more and more general; it has lost its focus on the Second World War. Searching for a way to strengthen the original values, Theater Na de Dam was set up. Now every year, at 9 o’clock, after the memorial service, performances related to issues of the Second World War are staged in the whole country. Not only already existing performances, but also newly created work. Part of this new work are the youngster projects, which I am very involved with. 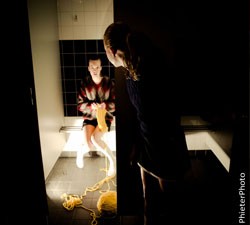 Since 2012, alongside producer Marit Vreeswijk from cultural youth centre VOLTA, I’ve been making such performances with youngsters based on the true stories of people who were young during the Second World War. Characteristically, we seek for the connection between narrating elderly, participating youngsters and the neighbourhood of VOLTA. In 2012 we made Toen het Oorlog was, a walking route with theatrical moments, making war tangible. In 2013 we made Bij Anderen Thuis, about children who lived somewhere else during the war, played in several living rooms throughout the neighbourhood. This year we made a performance about sport and war in the local swimming pool, called FC Bleekneusjes.

Though the performance itself is naturally a special occasion, not in the least because of the atmosphere of the night of May 4th, the moment that should be cherished lays more in the beginning of the project. After the group of 15 youngsters is formed, we very quickly bring the youngsters and elderly together. In what we call ‘story-tell meetings’ youngsters interview the elderly, on their own or in duos. For almost everyone the beginning of this encounter feels a bit uncomfortable, but after some small talk the elderly are telling about their time during war, while the youngsters are making notes and asking everything they want to know.

Though the conversations often start off with stories about the war, the youngsters and elderly soon start to talk about all kinds of things. Often conversations turn to subjects such as equality, racism and feeling at home in the country you live in. Because children of immigrant are part of our group every year, there is also an unknown story to be told from youngster to elderly.

After these first encounters the youngsters often speak of ‘their’ storyteller, appropriating not only the person, but also the story. The Second World War is no longer an abstract period anymore; it is a collection of stories from people they actually met.

After turning the stories in to a performance, there is another moment to be cherished: the applause (of course), but especially what comes next. In the moment just after the play the storytellers are searching for ‘their child’ to firstly compliment them with the play, but even more to speak further with them and tell them more, to actually truly connect for the second time.

Through programming performances and especially producing youngster projects Theater Na de Dam not only provides an alternative for remembrance, but also connects history to present by facilitating true encounters. And with that in mind, the brilliant simplicity of an encounter between a Holocaust survivor and a young Dutch-Moroccan girl, gives a more hopeful perspective for society than any other thing I could think of.

Hanna Timmers – Guts Company – Fan Page
In 2010 Hanna Timmers graduated at the Theater In Education department of De Theaterschool in Amsterdam. Since then she has been working as a teacher of theatre, director and designer of educational material for youth theatre companies. Next to this, she is artistic director of GUTS, a foundation that initiates projects on the border of art and society.

AN ENGLISH GIRL AT THE OFFICESin categoría 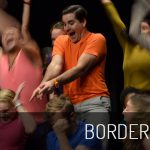